We first experimented with the iSquare protocol to study students' conceptions of information in one of my courses entitled “Information, a resource for the enterprise” in the first trimester of 2015. 52 iSquares were thus collected.
We then extended it to the concept of communication in a course entitled “Theories of Information and Communication”  which I have been teaching since 2014. This led to collecting 24 cSquares in 2014; 74 cSquares in 2015 and 65 cSquares in 2016.
​We analysed the drawings collected in 2015 (52 iSquares and 74 cSquares in these two separate courses) in order to determine if there were similarities or significant differences in the way the concepts of information and communication were depicted.
It should be noted that there is a significant overlap amongst the students who produced the 52 iSquares and 74 cSquares. Roughly, two-thirds of the students were enrolled in both courses. However, it is not possible to study how the same student rendered these two concepts since the squares are anonymous (no names).

1. Classification of the graphic representations

Based on Engelhardt’s 2002 classification of graphic representations used by Hartel (2014) to classify her iSquares, we give in Table 1 below, the types graphic representations found in the iSquares and cSquares and compare them to those found by Hartel (2014) in her collection of 137 iSquares.
As the table below shows, pictures, link and grouping diagrams were prominent in our students' drawings (for their definitions, see Engelhardt 2002). These findings concurred with the ones made by Hartel’ in her 2014 study. In the case of cSquares, they were the only categories present.
However, we note that pictures were more popular in Hartel’s iSquares (72 out of 137) whereas in our case, link diagrams were the most popular type of graphic representation both in our iSquares and cSquares. The iSquares reflect students’ perception of information as a tangible thing, hence the drawings portrayed more the means through people accessed information (formats, media, titles) and how the information was gained (speaking, reading, listening). On the other hand, the drawings in the cSquare clearly had a more relational feel to them, linking diagrams were by far the most preferred type of graphic representation (40 drawings out of 74 cSquares were link diagrams against 20 link diagrams in our iSquares out of 52). The cSquare drawings were also more cluttered with students using up most of the space to represent the complexity and the circular nature of communication: the objects and people depicted were almost always involved in some form of interaction. These differences could be explained by three reasons:

We tried to identify the prevalent themes in the iSquares (2a) and the cSquares (2b). Our preliminary findings are presented below. Galleries 1 & 2 hereafter give examples of iSquares and cSquares depicting each theme. Clicking on an image will open it in its own window and display its caption.
Gallery 1. Drawings exemplifying the six prevalent themes found in the 52 iSquares. 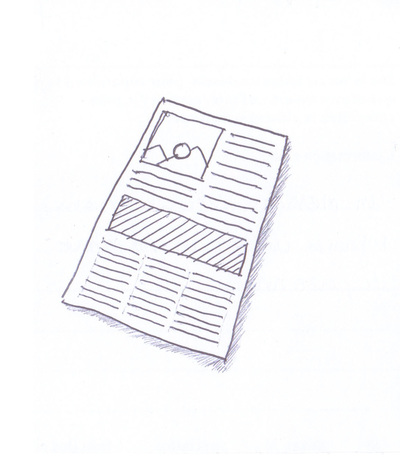 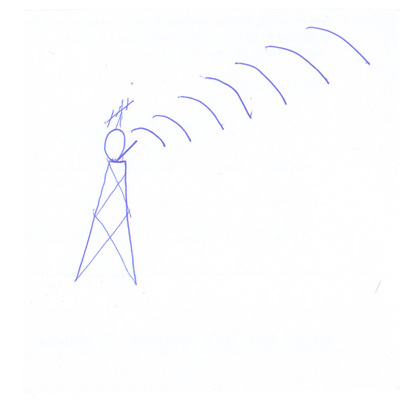 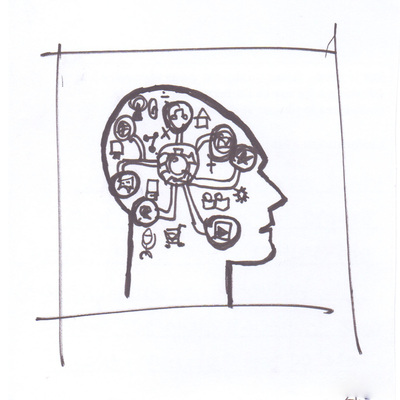 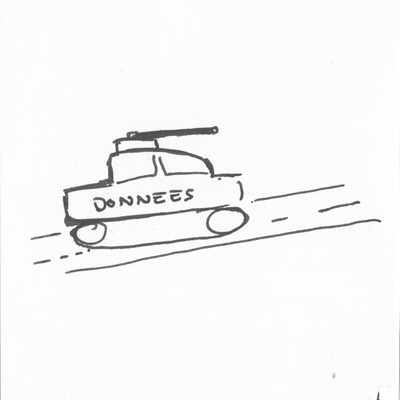 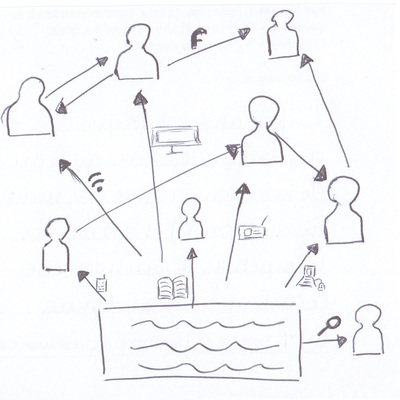 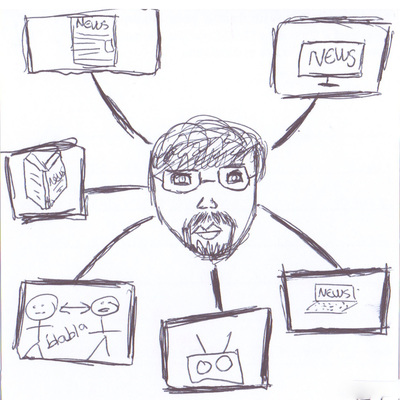 Gallery 2. Drawings exemplifying the prevalent themes found in the 74 cSquares. 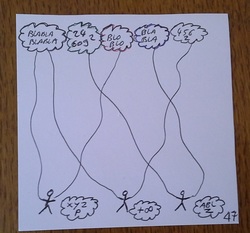 Information spirals iSquare
Hartel (2014) recalled that researchers using the draw and write technique in other fields felt that “the written portion of the exercise is crucial to understand the meaning of the drawing (Briell et al., 2010)”.
Hartel (2014) analysed the correspondence between the drawings and textual definitions in 137 “information squares” (aka iSquares) drawn by students at the School of Information Studies, University of Toronto. She found that the relationship between some drawings and their textual definitions of information were often confounding, i.e. they were not correlated. We replicated her experience in a French setting, first to study the conceptions of information (iSquares), and then extended it communication (cSquares). We found Hartel’s observation to be largely true for students' conceptions of information (iSquares) but much less their renditions and verbal expressions of communication (cSquares).
For instance, we were bewildered by this abstract representation of information which we termed "information spirals". as it offered no clue about the student's perception of what information. We had to rely on the textual definition on the other side of the drawing which read ‘Information is noise: Nowadays everything is distorted to buzz more than your neighbour. Information is what enables us to retain what suits us in order to defend our ideas.’
This iSquare portrays the idea that information is at best noise and at worse propaganda, thus echoing the same ideas of the influence of the mass media propaganda that we found in some of the cSquares.

Overall, we found that there tended to be a correlation between the drawings and the textual definitions in the cSquares. Students often used the text to reinforce the impression they tried to convey with their drawings such that there was a form of redundancy between the two. For instance, the textual definitions behind the two cSquares (3, 21) depicting communication as an act of persuasion and influence explicit.ly corroborate this reading. The textual side of cSquare 3 reads "Communication is “to orient the thought of a consumer or even manipulate his/her acts in order to bring him/her to consume and integrate a specific message" while cSquare 21 sees communication as “a set of methods and tools used by a company/organisation with the aim of building, improving its image and adjusting to its environment.”
On the other hand, there was more divergence between text and drawing in the iSquares. Students seemed to use a mode of expression (written or visual) to complement the other by expressing a characteristic of information that was not perceptible in the first mode whereas in the cSquares the students tended to use the two modes to convey the same facets of communication. There were however a few cases where drawings and accompanying textual definitions diverged in the cSquares.
Surprisingly, none of the textual definitions to the four cSquares in Gallery 2 (cSquares depicting machine-mediated communication) make explicit reference to the use of modern technological devices for communication, although one can consider that this is implicit in the Shannon-Weaver transmission paradigm which they all evoke to varying degrees, since this model implies the use of technology to encode, transmit and decode messages. What matters in these definitions is the content of the communication (message) and the process.
The definition to cSquare 20 reads Communication is “is the art of communicating something to someone, it is the manner in which a message is formulated and transmitted.” while cSquare 48 defined communication as the “transmission of a message from someone to another person or a group of people. The message can be written, oral, digital or non verbal.” cSquare yet again saw the role of communication as that of “establishing a relation with one or more people in order to transmit a message.”. Lastly cSquare 62 offered a terse definition of communication as “Speaking, seeing, hearing.”
These definitions seem to have been inspired more by the Palo Alto school of thought for which communication is not just the content but the relation created between the participants and the manner in which the content is conveyed. This is apparent in definitions 20 and 54. In short, the textual definitions seem somewhat at odds with the drawings which emphasised modern technological devices whereas the definitions insisted on the human aspect of communication as a message which has to be put in shape and given a form, or as a relation between people wishing to interact. Hence the definitions here are closer to the first category of interpersonal communications cSquares analysed than to machine-mediated communication.
The text-to-drawing correspondence will necessitate further studies, preferably in more cross-cultural and international setting.

The Shannon-Weaver mathematical model of information overshadowed practically all the drawings in both iSquares and cSquares, insofar as the vast majority of them were about messages being emitted, transmitted, received and acted upon by the receivers. However, in the cSquares, students did not use the abstract kind of drawings we found in the iSquares to represent the emission process. They favoured more relational, circular forms in the cSquares (symbolism of the circle?).
The overarching impression, across the link diagrams is that of information in movement that flows from one person to another thus creating communication and relation. Information and communication are perceived here as phenomena in constant circulation which is reminiscent once again of Norbert Wiener’s cybernetics theory that information and communication are the basic components of our universe and of a democratic world, thus they should be free to circulate without any constraints or censorship to avoid sclerosis and the return to chaos.
Hence, in the minds of the students, Shannon-Weaver linear model of information and communication and Wiener’s cybernetic model are not opposed but form a continuum. Students often evoked both models in the same representation, either the drawing portrayed one model while the accompanying textual definition complemented it with the other model. For instance, in one of the iSquares, a student clearly tried to capture both Shannon and Wiener’s information and communication models in one drawing which depicted a communication process with a (i) sender (émetteur), (ii) a receiver (récepteur), (iii) the communication content and in the middle (iv) noise (bruit), below the words (v) retroaction and feedback. A separate drawing beneath the previous one has the words data and receiver linked by an arrow and lines.
Also, the iSquares classified as “Information as networks” (see Gallery 1 above) could be likened to the cSquares depicting communication as “Internet and Global village” (see Gallery 2 above). They both convey the idea of a globe covered with information or communication technologies and artifacts, connecting people and abolishing, time, distance and geographical barriers. This is very reminiscent of a wienerian ideology of a democratic world governed by the free flow of information.
In the iSquares, the drawings grouped under “Information-as-process” are similar to the cSquares we grouped under “Interpersonal communication” because they both portray the conception of information and communication as a human phenomena, albeit with notable differences. In the iSquares, the “Information-as-process” images showed the interior of the head (3rd image in Gallery 1 above) whereas the cSquares which could come under this label "communication-as-process" depicted were grouped under the circular and complexity model of communication defended by the Wiener and the Palo Alto school.
Notwithstanding the subtle variations in the way of in which information and communication were rendered by the students, a fundamental set of themes appear to be prevalent in both conceptions of information or communication, thus reaffirming the proximity of the two concepts both epistemologically (their meanings cannot entirely be dissociated one from the other) and historically. Indeed, some of the most influential and popular theories of information and communication were propounded simultaneously by researchers who knew each other and mixed in the same circles (Shannon and Wiener, the Macy conferences which ran between 1941 and 1960). The major themes found in both collections of iSquares and cSquares were the following:The table below gives a more detailed list of transversal themes in both collections.